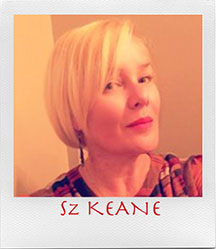 Carrie Sz Keane studied journalism and English at the University of Maryland and later apprenticed as a midwife in rural Kentucky before studying nurse-midwifery at Yale University. While at Yale, Keane was awarded a humanities honor in creative writing with her piece entitled “Modern Nurse Nancy,” a story about working a night shift as a new nurse on a postpartum unit, which was later published in a Canadian nursing textbook. Upon graduating in 2004, Keane has been journaling and writing the stories of her work as a midwife and her relationship with her patients and the community of Sussex County Delaware. She is actively writing a journalistic memoir of her career. Ms. Keane works at Planned Parenthood of Delaware as asexual health clinician providing contraception, annual examinations, STD screenings, and treatment for males and females.

Carrie’s work has appeared in the DPP anthologies SOLSTICE, EQUINOX, and AURORA, available at Amazon and other booksellers.